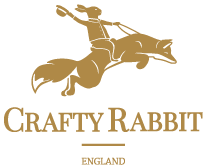 The crafty Rabbit is the British cousin of Brer Rabbit from The Uncle Remus stories by Joel Chandler harris.

We are a family run business with the surname of Warren – and “Bunny”; ” Rabbit” and other nick names have been common place in our history for generations. When deciding what to call our company we had to include the name Rabbit somewhere. The rabbit is a quintessential icon of the British countryside, seen as a pest or vermin by some, or an adorable fluffy animal by others. Whatever your view; there is one fact about the poor old British bunny that cannot be denied… he is a prey animal.

Prey animals can be cunning and often outwit their predators, anyone who has ever fished for pike or carp will tell you that these species are more “crafty” than given credit for. Brer Rabbit from the Uncle Remus stories often out wits his old foe and predator Brer Fox. In fact in one story Brer Rabbit tricks Brer Fox into becoming his riding horse.

For a predator or hunter to catch the prey, you have to be at least as crafty as the prey and with a nickname like “Rabbit”…The Crafty Rabbit was the newest addition to the Warren family. (Oh and of course he is very much a British bunny with American roots).

The story of Brer Rabbit out- witting Brer Fox is laid out below… I wonder if anyone can guess how we got the idea for our logo, a very British Mr Rabbit wearing his bowler hat ?

“Seem like that the tale about how he got mixed up with the Tar-Baby got ’round amongst the neighbors. Leastways, Miss Meadows and the gals got wind on it, and the next time Brer Rabbit paid them a visit tackled him about it, and the gals set up a monstrous gigglement. Brer Rabbit, he sat up just as cool as a cucumber, he did, and let them run on.”

“Who was Miss Meadows, Uncle Remus?” inquired the little boy.

“Don’t ask me, honey. She was in the tale, Miss Meadows and the gals was, in the tale I give you like it were given to me. Brer Rabbit, he sat there, he did, sort of lame like, and then by and by he cross his legs, he did, and wink his eye slow, and up and say, says he:

“‘ Ladies, Brer Fox was my daddy’s ridin’-horse for thirty years, maybe more, but thirty years that I knows of,’ says he; and then he paid them his respects, and tip his beaver, and march off, he did, just as stiff and an stuck up as a fire-stick.

“Nex’ day, Brer Fox come a callin’, and w’en he began for to laugh about Brer Rabbit, Miss Meadows and the gals, they ups and tells him about what Brer Rabbit say. Then Brer Fox grit his tooths, sure enough he did, and he looked mighty dumpy, but when he rise for to go, he up and say, says he:

” ‘ Ladies, I ain’t disputin’ what you say, but I’ll make Brer Rabbig chew up his words and spit them out right here where you can see him,’ says he, and with that off Brer Fox put.

“‘Is that you, Brer Fox? I want you to run and fetch the doctor. That bait or parsley FN4 what I what I ate this morning is getting away with me. Do, please, Brer Fox, run quick,” says Brer Rabbit, says he.

“Course, Brer Rabbit know the game that Brer Fox was fixin’ for to play, and he determined for to outdo him, and by the time he comb his hair and twist his mustache, and sort of rig up, here come Brer Fox, saddle and bridle on, and lookin’ as pert as a circus pony. He trot up to the door and stand there pawin’ the ground and chompin’ the bit same like sure enough horse, and Brer Rabbit he mount, he did, and they amble off. Brer Fox can’t see behind with the blind bridle on, but by and by he feel Brer Rabbit raise one of his foots.

“By and by Brer Rabbit raise up the other foot.

“All this time, bless gracious, honey, Brer Rabbit were puttin’ on his spurs, and when they got close to Miss Meadows’s, where Brer Rabbit was to get off, and Brer Fox made a motion for to stand still, Brer Rabbit slap the spurs into Brer Fox flanks, and you better believe he got over ground. When they got to the house, Miss Meadows and all the gals was settin’ on the piazza, and instead of stoppin’ at the gate, Brer Rabbit rode on by, he did, and then come gallopin’ down the road and up to the horse-rack, which he hitch Brer Fox at, and then he saunter into the house, he did, and shake hands with the gals, and set there, smokin’ his cigyar same as a town man. By and by he draw in a long puff, and then let it out in acloud, and squared himself back and holler out, he did:

“‘Ladies, ain’t I done tell you Brer Fox was the riding horse for our family? He’s sort of losing his gait now, but I expect I can fetch him all right in a month or so,’ says he.

“And then Brer Rabbit sort of grin, he did, and the gals giggle, and Miss Meadows, she appraise up the pony, and there was Brer Fox hitched fast to the rack, and couldn’t help himself.”

“Is that all,” Uncle Remus?” asked the little boy as the old man paused.

“That ain’t all, honey, but won’t do for to give out too much cuff for to cut one pair pants,” replied the old man sententiously……

We use cookies to ensure that we give you the best experience on our website. If you continue to use this site we will assume that you are happy with it.Ok
Scroll to top